HomeBlogSTORIES FROM THE HEART: She ran a 5K and had cardiac arrest the same morning; now she’s an EMT, AHA volunteer

STORIES FROM THE HEART: She ran a 5K and had cardiac arrest the same morning; now she’s an EMT, AHA volunteer 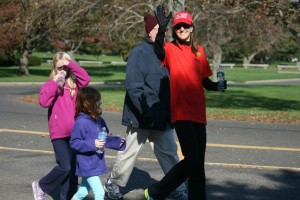 A week after turning 40, and only hours after running a 5-kilometer race, Nancy Capelle was putting some peanut butter on a banana when she felt severe pain in her chest.

The pain traveled through her entire back and through both sides of her jaw. She considered calling an ambulance, but didn’t want to scare her two young daughters. Once her husband arrived, they looked up her symptoms on the Internet and realized they needed to call for an ambulance.

“I probably let 45 minutes go by, which was not smart,” she said, “because 15 minutes later I went into cardiac arrest.

“Had I waited any longer, I’d pretty much have died on the kitchen floor.”

Pulling out of the driveway of her home in Wilton, Conn., the medical team sprang into action.

An electrocardiogram (EKG) – a test that measures the electrical activity of the heartbeat – showed that Nancy was having a heart attack. A paramedic started an IV and gave Nancy aspirin to chew. She lost consciousness more than once.

“For about 30 seconds or so, I was what they considered dead,” she said.

Nancy’s heart had gone into a lethal arrhythmia, a beating pattern that doesn’t sustain life. A blockage limited the blood flow to her heart, causing the irregular beat. She vividly remembers when paramedics shocked her with an automated external defibrillator (AED).

“I always tell people it was like getting kicked in the chest and the back at the same time by a horse,” Nancy said. “It was incredible.”

By the time the ambulance arrived at the hospital, Nancy started to stabilize. Again, she proved to be lucky, because she had a type of heart attack that is usually fatal.

Nancy had what is called spontaneous coronary artery dissection, or SCAD. Part of an artery in her heart actually peeled away, and that torn flap created the blockage.

“It is very rare, and, unfortunately, a lot of the time it’s not diagnosed until autopsy,” she said. “It’s a miracle that I’m here.”

Doctors diagnosed her condition through an angiogram. They decided to allow the heart to heal without an operation – no stents or bypasses. Instead, she went home wearing a life vest that had a defibrillator built in. She wore it for five weeks, and it constantly monitored her heart. She also was treated with blood thinners and beta blockers.

She still doesn’t understand why part of her heart peeled away.

“I had no heart disease in my family. I had run a 5k that morning. My cholesterol is perfect,” Nancy said. “It was the absolute last thing I thought would ever happen.”

The fact that it did prompted Nancy to make major changes in her life.

After years of being dedicated to her career, Nancy decided to leave her high-stress job at a pharmaceutical company and focus on matters that meant more to her. She felt that she’d only lived half of her life, and she wanted to make the most of the rest of it.

“It was a huge turning point,” she said. “There is a reason I survived, and what I can do with it.”

She’s become more involved at her daughters’ schools, and across her community.

Nancy and her husband donated a $15,000 chest compression system to the hospital. She also helped Wilton earn the distinction of being a HEARTSafe Community, a designation from the Connecticut Department of Public Health, the Office of Emergency Medical Services (OEMS) and the American Heart Association.

She’s become certified in CPR, and a volunteer with the American Heart Association, the nation’s oldest and largest voluntary dedicated to fighting heart disease and stroke, the No. 1 and No. 4 killers of Americans. The organization funds more studies about cardiovascular disease than any organization outside the federal government in hopes of finding more answers about SCAD and all other conditions. She also helps advocate for public policies the organization supports, such as legislation requiring CPR training in schools.

Nancy took a job as an assistant to the chairman of medicine at her local hospital. She got another job, too – as an emergency medical technician (EMT). She is one of about 50 volunteers with the Wilton Volunteer Ambulance Corps, where she’s on duty 24 hours a month, including two overnight shifts.

Nancy always wanted to be the helper at an accident scene, not the rubbernecker. Now look at her.

She hopes her story inspires others to pursue their passions, too.

“Think about what it was you wanted to do when you were 5 or 10 years old,” she said, “and how could you still do that.”

When the alarm sounds at WVAC headquarters, and before we run out the door and respond to the scene, we listen to dispatch fo...

When a Wilton Volunteer Ambulance Corps (WVAC) crew is dispatched to a 911 call, the first things the crew seeks to understan...

What do you imagine is the No. 1 priority for an Emergency Medical Technician (EMT)? When I ask people this question, most ...